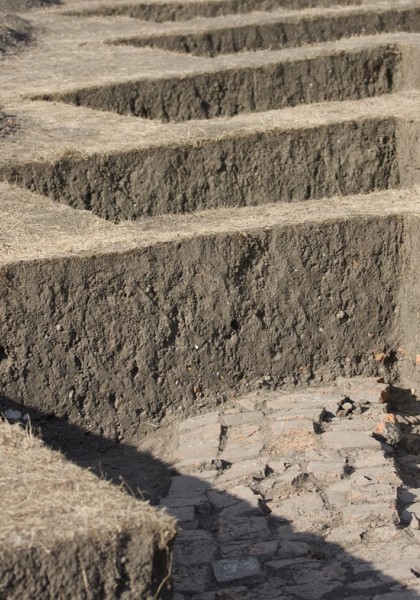 The archeological site Bizere Monastery from Frumușeni, is located in the Mureş meadow, on the left bank of the Mureş, in the place called “The Turk’s well”. In 1183, the abbey dedicated to the Blessed Virgin Mary was attested for the first time, so that at the end of the 12th century the Bizere monastery was functioning as a Benedictine place of worship, under royal patronage. The abbey controlled the transport of salt on the Mureş River.
In the 13th century, the monastery, with a number of 23 monks, had an annual income of 4,000 boulders of salt (items very difficult to obtain in those times).
From the 14th century, the Benedictine monastery experienced a constant decline, and in 1557, after the Turkish invasion in areas of the Arad county, the monastery was no longer recorded as functional.
The archaeological research, which began in 2001, revealed the abbey palace, the cemetery and in 2003 the mosaics - of Byzantine and Romanesque tradition, from the church of the monastery were discovered; they were unique in Romania and in South-Eastern Europe. In 2009, archaeologists continued the archaeological investigations at Bizere, in parallel with the preventive in situ conservation of the mosaics and the first virtual reconstructions of parts of the monastery: the funeral chapel, the tower-fountain, the cloister portico and the inner courtyard with fountain.
The archeological site Frumuşeni Monastery is located in a protected area, due to the approach initiated by the Arad County Council, by the City Hall of Frumuşeni Commune and by the Arad Museum Complex in 2008, when the site became an archeological reservation. Thus, the archaeological site of Bizere Monastery is not only an area with archaeological potential, but also with touristic potential, being unique in Arad County and in the west side of the country.
Inside the archeological reservation, on the occasion of the opening of the archeological sites in the summer season, thematic guided tours were organized and also the archeological kindergarten, archery stand, horse riding, multimedia projections, followed by medieval music concerts.