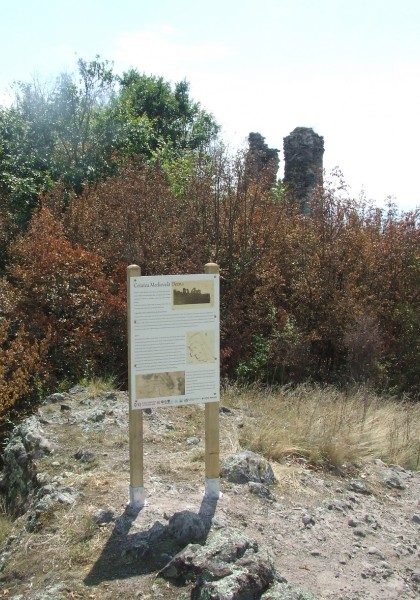 Dominating the region and the access road to the "heart" of the Codru-Moma mountains, the fortress erected in the center of a Romanian duchy dates from the thirteenth century.The fortress had the highest importance during the 16-17th centuries. Around 1552 it was a part of the defense system of western Transylvania, especially after Ineu fell into the hands of the Turks in 1566. Because of this, the fortress was reinforced and the bastion of the Northeast was added. That was the moment the fortress received a Renaissance architecture, having similar elements with the fortress in Șoimoș. Around that time, new parallel walls were added to the vulnerable sections. They were built from rock, then filled with river stones and brick with mortar, also limestone.
In 1574 the fortress was lost and then regained in 1596. Between 1599 and 1601 Dezna fortress belonged to Gaspar Kornis, an ally of Mihai Viteazul, who facilitated the ruler’s passage through this region on his way to Prague.
Between 1601 and 1658 the fortress had several rulers. In 1619 it was donated by prince Gabriel Bethlen to Marcu-Cercel Vodă. In 1658 it is conquered again by the Turks, along with Ineu. In the coming decades, Dezna disappears as a fortification.
According to legend, Peretseny Ladislau Nagy (1817) stated that the name of the fortress derives from the name of Dacian king Decebal.
Another legend tells us that the Turks had gathered inside the fortress a large number of girls for the harem of a military chief. Unable to escape, in order to avoid the terrible fate wiaiting for them, one of the girls managed to snuck inside the explosives chamber, lighting it on fire. In this regard, recent studies do not exclude some truth in this legend, as some signs are compatible with the destruction of the fortress by explosion.
So far three walls were preserved in the main bastion. Traces of other walls, the contour of the courtyard and fragments of the fortress trenches and still be seen.