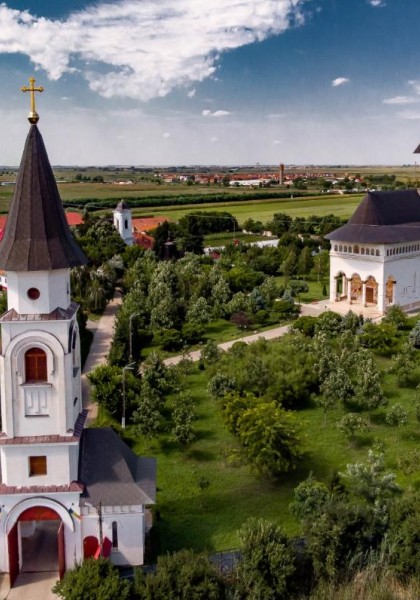 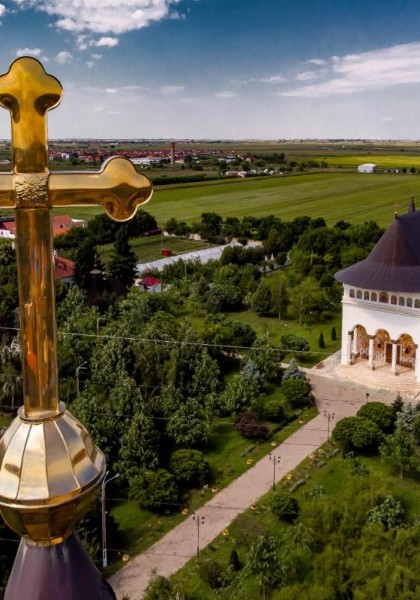 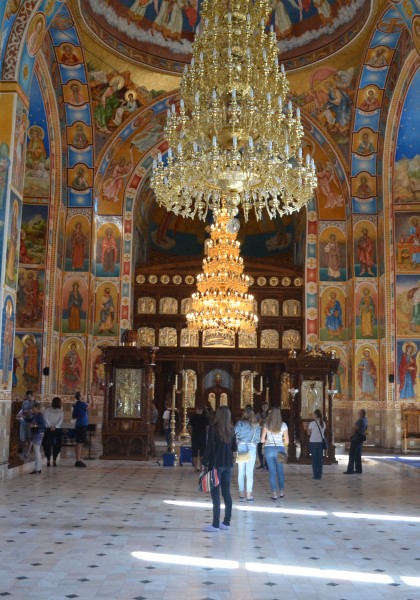 In the north-west of Arad city, in the Gai district, at the end of the Dunărea street, rises one of the most representative monuments of the 17th century, from western zone of the county, the „Sf. Simion Stâlpnicul” Monastery or the Gai Monastery. The Gai Monastery was bulid between the years 1760-1762 by the bishop Sinesie Jivanovici (1751-1768) for his eternal remembrance and in order to be used by his descendants in the episcopal seat of Arad.
The eastern facade of the arhitectonic complex is imposing and richly ornamented, taking a characteristic note of the buildings belonging to that era. The church tower, located in the south-west area of the complex, impresses with the two registers and the cornice, richly architectonically ornamented. The entrence to the church is placed in the tower shaft, fitted with a rectangular frame made of stone. The tower is equipped with a pyramidal roof, composed of curved slopes and it’s made of zinc sheet.
Inside, the planimetria church shows a sharing feature of the orthodox churches. To the east there is the semicircular altar apse, who shows to the outside a polygonal shape. The altar table is carved in red marble. The Bishop Sinesie was buried inside of the altar. After the demolation of the old cathedral of Arad, in 1861, the mortal remains of the bishop were buried in the cathedral, after being previously displaced in Gai inside of the shrine. The iconostasis arhitecture evokes the neoclassical style. The iconostasis picture was made by Stefan Tenetchi in 1767 in the late Italian Renaissance style. Of exquisite beauty are the imperial doors, with a particularly rich ornamentation. This vintage arhitectural ensemble, was complemented by bringing, in the complex, of the wooden church from Seliștea Mureș – Petriș commune – one of the most representative monuments of wooden Romanian architecture, to the Mureș Valley in 18th century.
In the monastery there is a museum point which is comprising the diocesan collection of religious art from the 16th - 20th century (old church objects, book and old Roumanian art); it was founded by the initiative of the PS Bishop Teoctist (ex patriarch) who arranged it in the museum, in the mansion (the old episcopal summer residence); the collection has heritage value and includes objects from the whole of Arad Diocese territory; the construction works were completed in 1967, and the bishop Visarion and afterwards by PS Bishop Timotei continued the work to organize the museum.