Țara Zărandului Museum
Address: Piața Libertății Street, no. 1, Sebiș
Contact: 0741609696 – Alexandra Vancu
Inside this museum the visitors can see a part of the collection of historical and ethnographic objects gathered by a hardworking local collective, displayed in a systematic and well individualized way. The archaeological objects on display, resulted from the excavations carried around, dating from the Paleolithic era to the era of developed feudalism, found especially at Iosăşel, Berindia, Chisindia, at the Dezna fortress etc.
Particularly interesting are the Romanian ethnographic objects, represented by various kinds of ceramic from the Valley of the White Criș (Târnăviţa), the glass icons and the objects characteristic for the ethnographic area of Buteni. These objects include: a loom, traditional furniture, alpenhorns and the famous flag and wedding tree from Chisindia.

Dezna Fortress
Contact: 0734889153 – Salvamont Arad
Dominating the region and the access road to the "heart" of the Codru-Moma mountains, the fortress erected in the center of a Romanian duchy dates from the thirteenth century. The fortress had the highest importance during the 16-17th centuries. Around 1552 it was a part of the defense system of western Transylvania, especially after Ineu fell into the hands of the Turks in 1566. Because of this, the fortress was reinforced and the bastion of the Northeast was added. That was the moment the fortress received a Renaissance architecture, having similar elements with the fortress in Șoimoș. Around that time, new parallel walls were added to the vulnerable sections. They were built from rock, then filled with river stones and brick with mortar, also limestone.
In 1574 the fortress was lost and then regained in 1596. Between 1599 and 1601 Dezna fortress belonged to Gaspar Kornis, an ally of Mihai Viteazul, who facilitated the ruler’s passage through this region on his way to Prague.
Between 1601 and 1658 the fortress had several rulers. In 1619 it was donated by Prince Gabriel Bethlen to Marcu-Cercel Vodă. In 1658 it is conquered again by the Turks, along with Ineu. In the coming decades, Dezna disappears as a fortification.
According to legend, Peretseny Ladislau Nagy (1817) stated that the name of the fortress derives from the name of Dacian king Decebal.
Another legend tells us that the Turks had gathered inside the fortress a large number of girls for the harem of a military chief. Unable to escape, in order to avoid the terrible fate waiting for them, one of the girls managed to snuck inside the explosives chamber, lighting it on fire. In this regard, recent studies do not exclude some truth in this legend, as some signs are compatible with the destruction of the fortress by explosion.
So far three walls were preserved in the main bastion. Traces of other walls, the contour of the courtyard and fragments of the fortress trenches and still be seen.

Distance from Dezna Fortress – Village Museum Moneasa: 7 km
Approx. duration: 15 minutes
Moneasa Village Museum
Address: Main Street, Moneasa
Contact: 0755313002 – Călina Moț
The museum was established in 2018, with the support of the City Hall, by Mrs. Florina Tzigler Groza. After opening the museum, Mrs. Diana Toderaș curated the museum’s collection. The museum was renovated in 2019.
In this museum one can see ethnographic and school-related objects such as: furniture, pottery, textiles, clothing, tools, and household items.

”The Holy Apostles Peter and Paul” hermitage
The orthodox hermitage in Moneasa is a new construction in our country. It lies on the top of a small hill, right in the middle of the resort. The „Holy Apostles Peter and Paul” hermitage is the newest settlement of the orthodox Bishopric of Arad.
The church, built out of fir wood, has been finished in the year of 2011.

Distance from ”The Holy Apostles Peter and Paul” hermitage – Moneasa lake: 1 km
Approx. duration: 10 minutes
Moneasa lake
On this small artificial lake in Moneasa one can row a boat or pedal a hydro bicycle. The lake is a well-known attraction in Moneasa. On this lake there is an island and on the island there is the Silent Lake guesthouse that also has a nice restaurant with a view.

The ruins of the melting furnace
The tourist attraction is about 10 meters high, built of granite stone with brick interior lining. Today you can still see the holes for feeding the fire and draining the cast iron, respectively those for cooling. The required water was provided by the nearby creek.
This furnace is an important vestige of intense iron processing activities which were practiced in the Sebiș-Moneasa region in the eighteenth and nineteenth centuries.

Distance from the ruins of the melting furnace to Bear’s Grotto Cave: 1,5 km
Approx. duration: 15 minutes

Bear’s Grotto Cave
The cave from Băi (Bear’s Grotto) is located at about 500 meters from the center of Moneasa resort, in the upstream of Băilor creek, at an altitude of 320 meters. The cave is the spring of Băilor creek, draining the water that gets lost in the sinkholes of the karstic plateau Izoi and Brătcoaia.
Contact: 0745369626 – Mihai Besesek 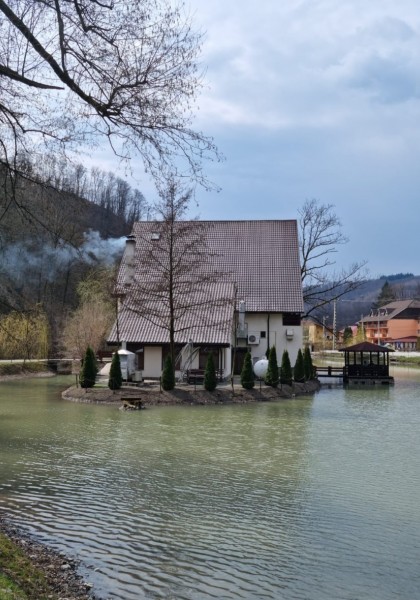 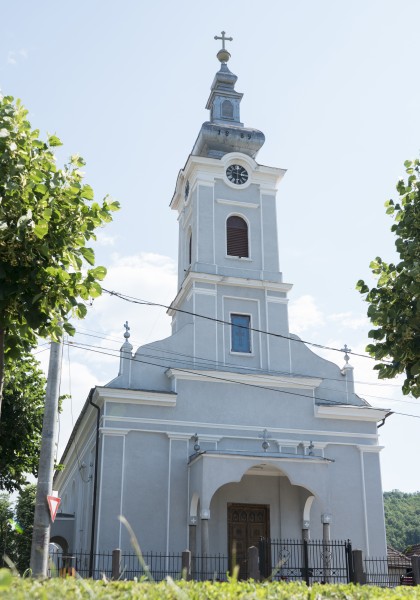 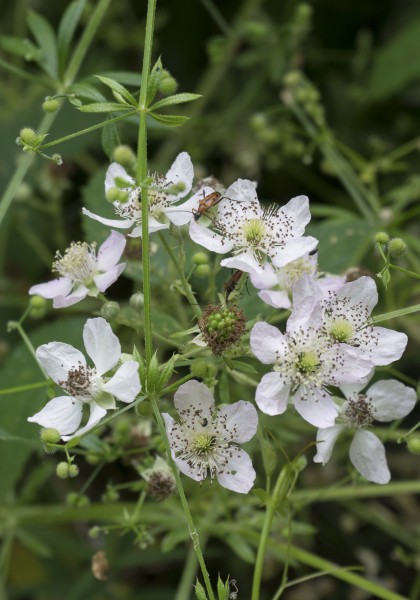 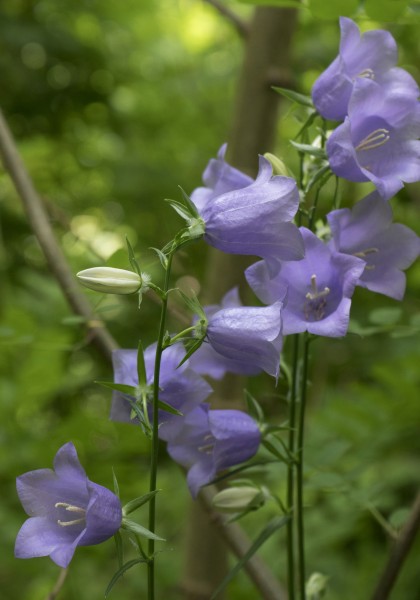 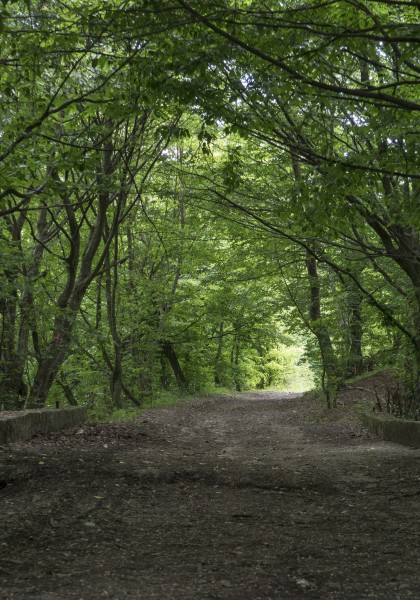 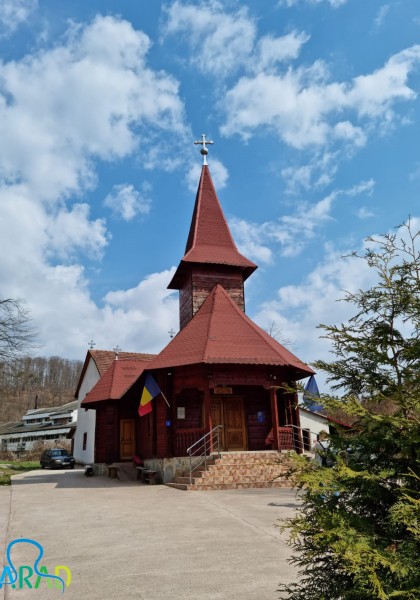 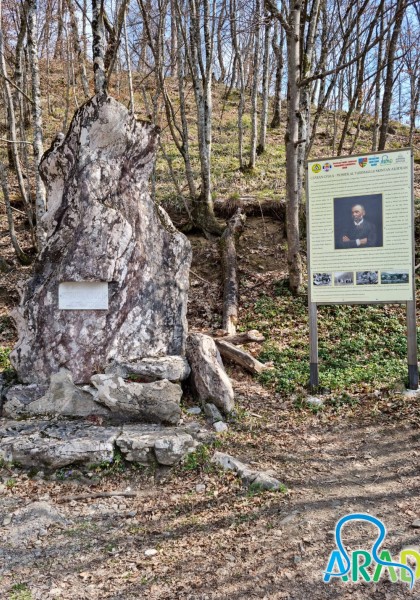 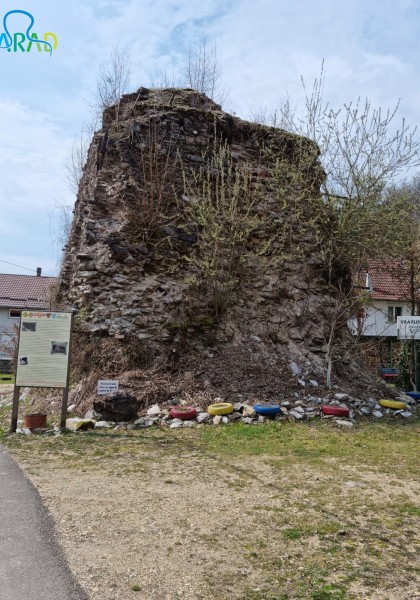 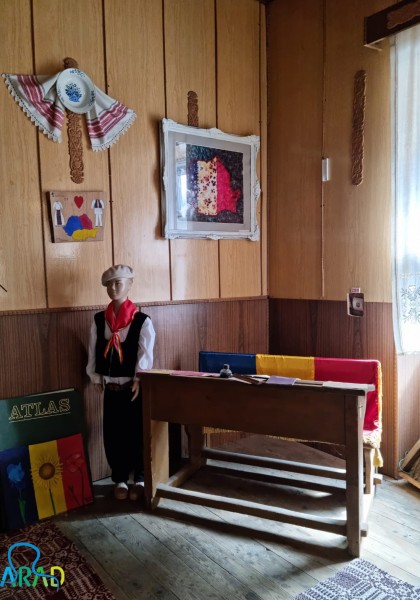